At the university we had a joke that philosophy mainly teaches the answer to the question “what will you do after philosophy?” and – although I explored this topic by creating a philosophical comic – I noticed that people after finishing this major can do everything, as far it envolves thinking. If you look for common elements, you will find that their CVs are, for the most part, patchwork of loosely related experiences. This was my case. When I realized that, by organizing concerts and shows of silent films with live music, writing poems and websites and doing a huge amount of more or less paid gigs, I would rather not make a living, I decided to write a guide to Czech breweries. It combined my interest in Czech culture, writing, and of course Czech beer, which densely stuck the pages of my biography (I also brewed a bit).

Nothing came out of the guide, and I quickly enough, within a week, I found another hobby – a corporate job. Before this happened, however, Tomek Kopyra, to whom I made a pilgrimage to learn more about beer, persuaded me to join the emerging Polish Homebrewers’ Association. In order not to go crazy from the excess of social and employer’s concern for my internal development, I needed to do something that made sense and aroused positive emotions, so brewing was the thing for me. With colleagues, we created from scratch the Mazovian Branch of the Association in which I was elected president and began to promote our common hobby. In the same 2012, I got a beer judge certificate and judged in my first competition in Żywiec (since then I haven’t missed a single edition).

As this was more inspiring form me, I quit the corporate world and, in 2013, started working as a beer specialist in Kufle i Kapsle, one of the first craft beer pubs in Warsaw. I dealt with the trainings, tastings and traveled around Poland and Europe to experience festivals and competitions, increasingly specializing in sensory evaluation of beer (I also started cooperation with the well-known company FlavorActiV and wrote a booklet Description of Sensory Aromas in beer). To make matters worse, since 2014, together with Jacek Materski – co-owner of the first Artezan craft brewery – I start organizing the Warsaw Beer Festival, reportedly the most prestigious festival dedicated to craft beer in Central Europe. In the meantime, in the years 2016-2019, I also worked for the Viking Malt malting group, which gave me the opportunity to learn about the industry from yet another side. But most importantly, I had the chance to do a lot of crazy things and meet hundreds of brewers and brewery owners in Poland and around the world.

It’s a really inspiring hobby / job and – as you can see from the story argument – I can tell anecdotes and stories from the beer world for hours. However, a good story, like a good craft beer, should have its beginning, development and ending. It should be intense, compact, closed by the brace, but also leave a certain hunger, encouragement for another sip, the next anecdote. When, in college, we were asked what we plan to do after philosophy, we answered that we would be happly unemployed. Today I earn a living by telling stories over a beautifully fragrant glass of beer. Well, at least half of my plans could come true. Welcome to my world, it’s full of great stories. 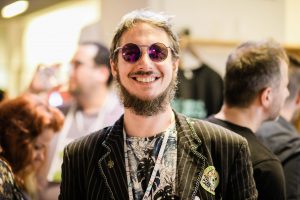